While the team of photographers took pictures of a yellow flower on the shore of Chocón Machacas River, I noticed that something yellow was moving on a plant next to us. It was a yellow mantis moving from one leaf to another. Photographers were interested in this insect because we have rarely seen it. Here we share you some photos. 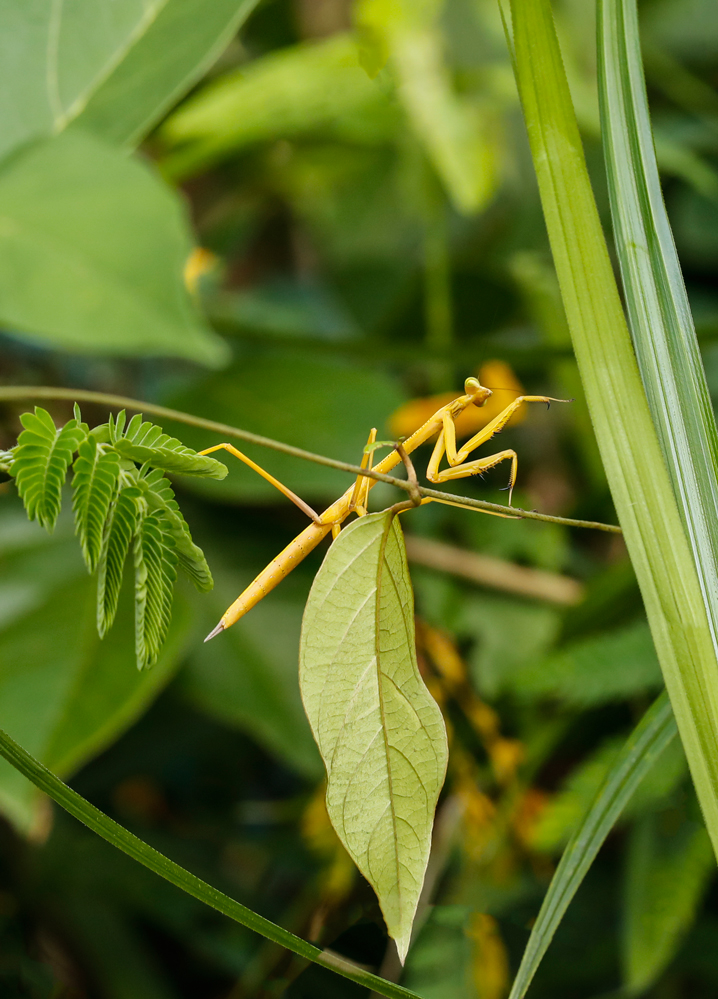 Praying Mantis get their common name from the stance they commonly adopt. The fore legs are raised as if in the act of prayer and actually, the legs are raptorial and they use them to grasp their preys. They eat prey of a similar size to themselves and bigger species eat vertebrates including mice, lizards and frogs. The name mantis is also derived from the Greek word for prophet (Amateur Entomologists’ Society, n.d.).

Mantids have a triangular head, very mobile and two very large compound eyes. The fore wings are leathery and, at rest, lie over the top of membranous hind wings to protect them. Not all species of mantis can fly but, those that do, are good fliers. It is often difficult to differentiate male and female mantis and usually this can only be done by counting the number of abdominal segments of adults. Generally, eight segments can be counted on the underside of the abdomen of a male and six on that of the female, but in some species the end segments are difficult to see and only seven or five may be counted (Amateur Entomologists’ Society, n.d.).

They are generally thermophilic insects and seek well sunny places, living on the ground or on the kill. Although some species fly towards the light at night, as a whole they are strictly diurnal and their activity is linked to a fairly high temperature, usually above twenty degrees (Torres, 2015).

In Guatemala it is one of the least studied insect orders, the following taxonomic table shows the different mantis families found in Guatemala, according to Yoshimoto, Cano and Orellana (2012):