Cetaceans are divided into two groups: Mysticeti (Mysticeti), which have baleen to filter their food, like the humpback whale and the blue whale; and the Odontocetes (Odontoceti), known as the toothed cetaceans, among them are the dolphins, killer whales and sperm whales.

Characteristics and adaptations of cetaceans

Cetaceans evolved fifty million years ago from terrestrial ancestors called pakicetidae (Pakicetus inachus) of the suborder Archaeoceti (Medrano González 2013: 10). Current cetaceans still have vestigial bones that correspond to the hind limbs that were attached to the pelvis. 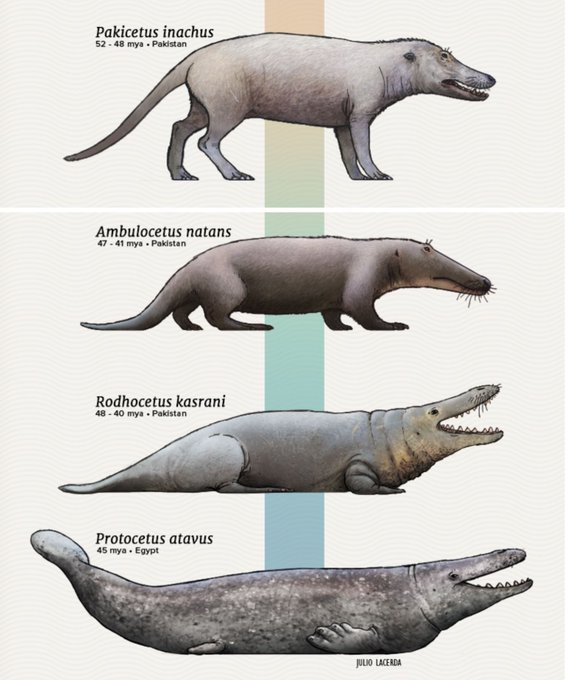 The evolution of cetaceans and the return to the aquatic world. Illustration by Julio Lacerda. 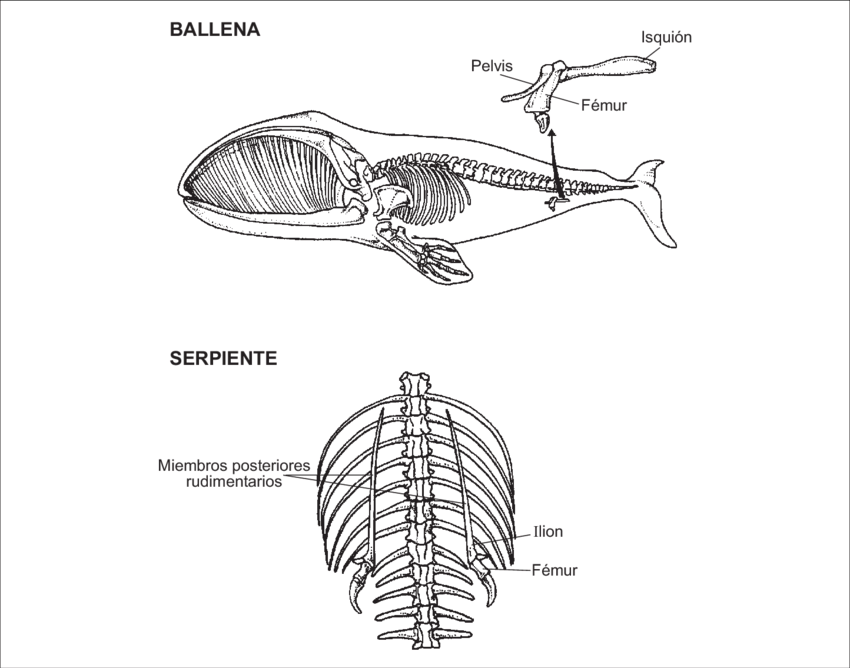 Vestigial bones in a whale, evidence of the evolution of cetaceans to aquatic environments.
Image extracted from Zamora-Muñoz 2002: 67.

Among the adaptations and characteristics that cetaceans have, some that we can mention are:

How does echolocation work in dolphins? 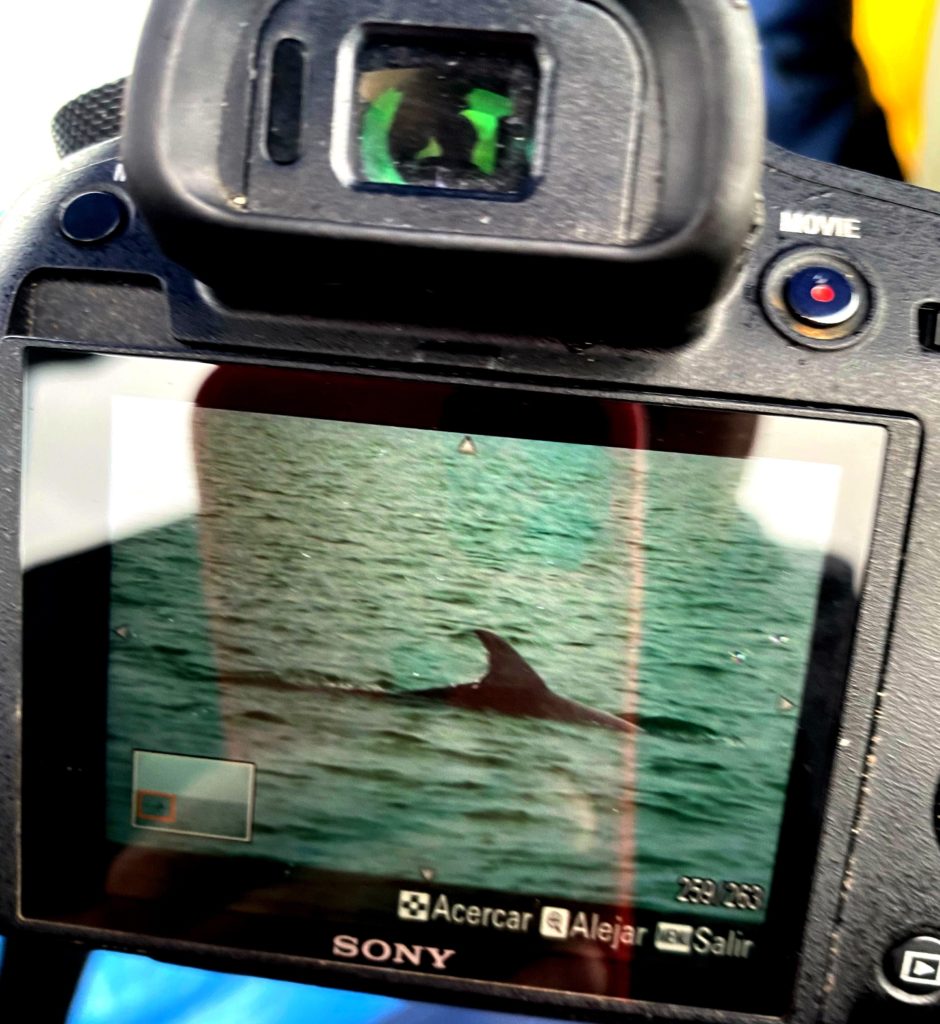 The Pacific area of Guatemala is important for the migration of marine mammals; feeding, socializing and migrating activities characterized by different behaviors have been reported. Feeding and reproduction are essential for the species to maintain and subsist in the area (Ortíz Wolford, et al 2012: 46). Migration activity occurs seasonally, mainly in baleen whales, from feeding areas to breeding areas. It is during the winter that they migrate to warm waters, such as the Pacific, to reproduce; and during the summer they stay in polar regions to feed (Cabrera Arreola 2011: 13).

Important areas of high cetacean diversity in Guatemala are the San José Canyon and the Central American Trench, both of which are located in the Pacific region. Both are deep oceanic zones (greater than 2,000 meters deep) that are characterized by being feeding areas with a large amount of nutrients, thanks to physical processes that maintain planktonic organisms (or food) so that they are available for more organisms in the chains. food, reaching predators. These processes keep food available for cetaceans, birds, fish, and plankton (Quintana-Rizzo, et al. 2021: 13-14). 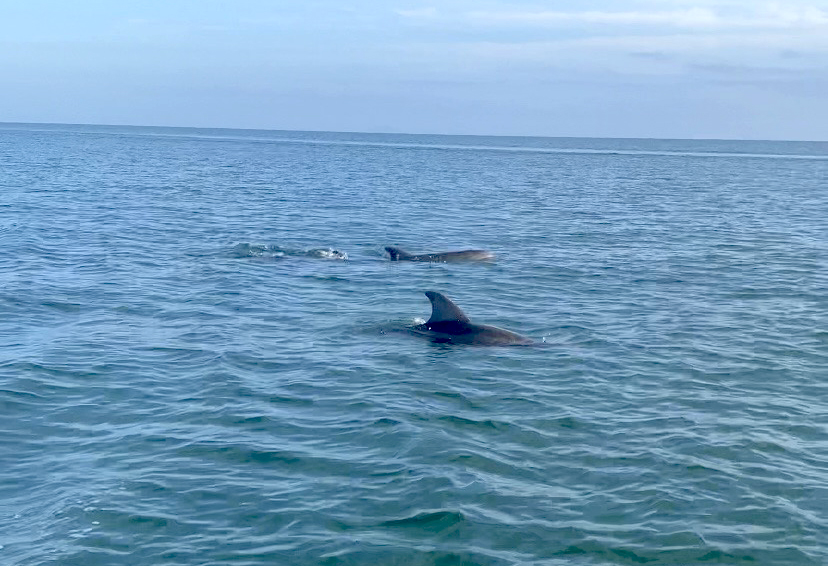 It is an activity of the encounter of cetaceans in their natural environments, it can be for recreational, research or educational reasons. It contributes economically to tourism in the country, mainly in the Pacific area, during 2006 and 2007 high incomes were reported for 800 tourists (Cabrera Arreola 2011: 16; Ortíz Wolford, et al 2012: 16). The whale watching season, especially humpback whales and dolphins, is high between the months of November to April of each year, it is the time of migration for reproduction and breeding (CONAP 2022). That is why whale watching should be promoted in the country with responsible practices to contribute to tourism, and also promote the conservation of cetaceans.

It belongs to the Delphinidae family. It is a medium-sized dolphin, it has a robust (bottle-shaped) snout. The body is characterized by dark gray colorations on the back and sides, and the belly is usually light gray, white or with pink tones, and some have spots on the sides of the body. Their dark gray coloration is considered a type of camouflage when they are in the shade, to avoid predators and not be seen by prey. (Alliance of Marine Mammal Parks and Aquariums 2017: 5).

It is a cosmopolitan species, that is, it is found all over the world. It is normally found in coastal spaces, but can be found in pelagic waters (Quintana-Rizzo, et al 2021: 8). Habitat use and preference depends on different factors, such as food availability, temperature, depth, among others (Alliance of Marine Mammal Parks & Aquariums 2017: 5).

They are organisms that form social groups, and are grouped according to age, sex, family relationships, affiliation history, reproductive condition, among others (Alliance of Marine Mammal Parks & Aquariums 2017: 10). And they tend to move seasonally based on these same factors, but the movement of the groups is not as widespread as that of the humpback whale migration.

Studies by Quintana-Rizzo et al. (2021: 8) report the bottlenose dolphin as the one with the highest number of encounters and sightings, with a wide distribution in the Guatemalan Pacific, both in coastal spaces and in pelagic environments. Various studies have reported and documented the presence of the species in the Pacific region of Guatemala, however there are not many studies pertaining to the Caribbean region. This is why reporting the species in the Caribbean area, in Livingston, was an incredible experience.

In the project: Livingston Biodiversity Documentation, the FLAAR Mesoamerica team had the opportunity to appreciate 4 different sightings of dolphins. The species sighted was Tursiops truncatus, commonly called the bottlenose dolphin. A curious fact is that its local name in Livingston is “TONINAS”.

In chronological order, the sightings were distributed as follows:

The dolphin sightings were unpredictable, we did not have a specific date and time to appreciate them. Our boatman told us that it is very likely to see them in herds in the morning hours and possibly in the afternoon hours. Another comment was that the dolphins were found feeding in the sightings that took place in the morning hours.

If you visit Livingston and sail in Amatique Bay, with a bit of luck you will be able to witness sightings of these incredible Cetaceans. 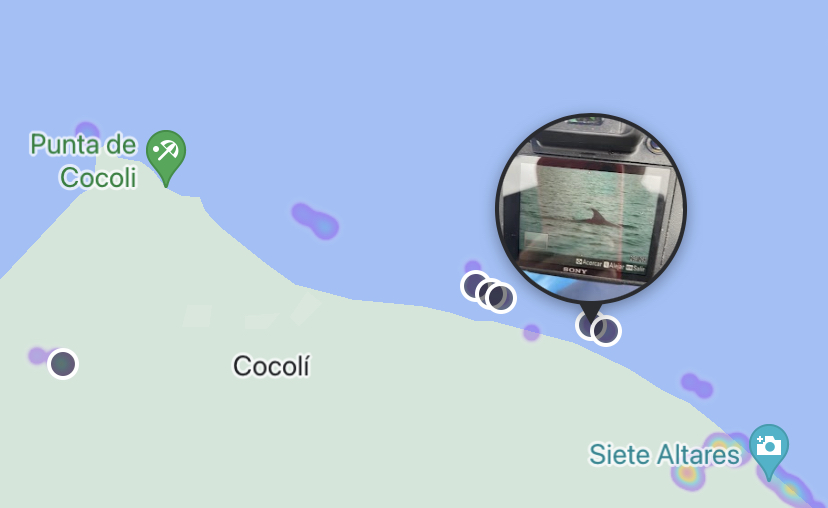 Why is World Cetacean Day celebrated?

Most cetacean species are considered in danger of extinction due to constant threats to their habitat, hunting, illegal fishing and illegal trafficking. Because they are extremely intelligent organisms, they tend to be used for entertainment and end up being captive species, with limited space and stressful environments. An example of this is the SeaWorld park and Water Land, which use killer whales, dolphins, and seals for shows and exhibits. A case from Guatemala in 2001, where two dolphins were found in the mountains of Santa Lucía in captivity, in poor conditions: the dolphins were kept in a shallow well and malnourished, they were found in the process of training to act in Water Land , a traveling dolphin circus (Whale and Dolphin Conservation 2021: 31). You can read more here:
www.dolphinproject.com/blog/dolphins-rescued-from-the-mountains-of-guatemala/ They are also on the List of Endangered Species of Guatemala -LEA-. Over the years, the commercial hunting of cetaceans, especially whales and dolphins, became a common practice in many countries, one of them being Japan. Because the populations of dolphins and whales became vulnerable, the World Day Against Whaling was proclaimed by the International Whaling Commission (IWC), on July 23, 1986, also known as World Whale Day and the Dolphins to raise awareness. (CONAP 2020).