In February of this year, we had the opportunity to visit the Biotopo Protegido San Miguel La Palotada El Zotz as part of our ongoing Biodiversity Documentation project in La Reserva de la Biósfera Maya. The Biotope is located in the municipality of San José, Petén, 584 km from Guatemala City and 65 km from Flores Petén. Starting from Flores, your drive to the municipality of San Andrés, until arriving at the village “Cruce Dos Aguadas”, from there continue to the right for approximately 23 km.

El Zotz, a reserve of biological and cultural value

Our main goal during the visit was to document the bats in the area, they are found in “El Peñón de Los Murciélagos” a limestone formation, part of a natural escarpment that limits the Buenavista Valley. According to data from the tour guides of the Biotope: this mountain range was a Mayan defense zone and more research is currently being done on how this defense worked. Archaeological investigations indicate that the lower areas were used for cultivation and the upper areas for defense. This was the trade route to Tikal (at a distance of 30 km to the west) and therefore small groups of ancient occupations can be found in the area. For example, El Palmar is the oldest place from the pre-classic period, it is the first Mayan settlement. Later in the classical period, they settled in El Zotz, and during the wars, they climbed to the top to defend themselves.

Another interesting fact is that in the archaeological sites of El Zotz vessels and glyphs with pictographs of bats have been found, the reason why the site is called in the same way (zotz = bat in the Mayan language). Within the Mayan worldview it was believed that bats came from the underworld.

Every evening, thousands of bats come out of the cracks and fissures of the rock in search of food and water, causing an incredible phenomenon that lasts approximately 30 seconds. Their departure may vary due to the change of the seasons, but they leave regularly between 6:00pm – 6:15pm and return at 4:00am – 4:30am in groups. During our visit we were able to observe and document the spectacle for 2 days in a row. We also document various species of flora and intermittent water bodies called “aguadas”. 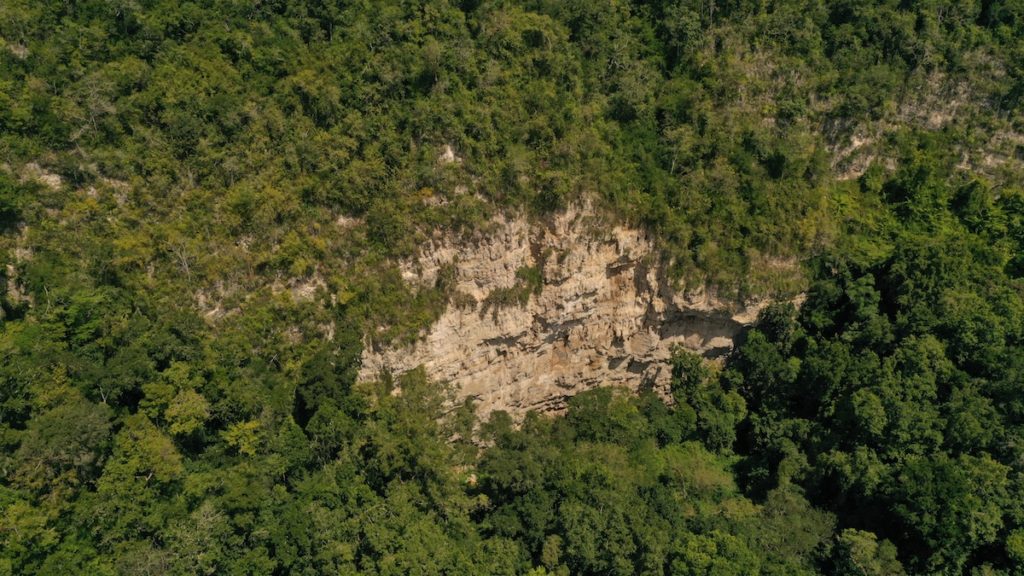 What kind of bats can we find in El Peñón?

39 species have been recorded according to previous research carried out in the biotope. Depending on their diet they can be classified into different categories, the most common that we can find on El Peñón are insectivores, they feed on insects, for that reason they are found in the cracks of the lower part. Those that come out of the upper part are the frugivores, who feed on fruits and need to be closer to the treetops. We can also find piscivorous species, which feed on fish and remain in the same way in the upper part to go to nearby bodies of water. On the other hand, a hematophagous species (Desmodus rotundus) has also been recorded, which appears in the list of species of the Master Plan of La Reserva de la Biósfera Maya 2001-2006. This species is known as the “common vampire”, it feeds on the blood of mammals such as cows or deer, and although there are many myths and misinformation in relation to “bats suck blood” you should know that there are only 3 species that do it and just Desmodus rotundus from the mammalian. In addition, recent research indicates that their saliva contains potential components to treat thrombosis (blood clot in one or more deep veins of the body) and could also be used as anesthetics, among other medical applications (Ligabue-Braun et al., 2012; Kakumaru et al., 2019). It is important to demystify the negative ideas that we have formed about these incredible animals.

Our team at MayanToons has created an infographic (in Spanish) perfect for learning about the favorite diet of these flying mammals. You can download it digitally here and you can learn about other animals in Reserva de la Biósfera Maya at this link www.mayantoons.org/index.php/2022/03/09/nuevas-infografias-en-mayantoons/

Why is Bat Conservation so important?

Bats fulfill important ecological functions. As mentioned above, they have different diets and through them, they can contribute positively to the ecosystem. Among its functions are: the dispersion of seeds (frugivores), pest control (insectivores), and even the pollination of various plant species (nectarivores, who feed on nectar). A very representative example is the pollination of agaves, which helps to obtain tequila (Agave tequilana), (Martínez-Hernández, 2019). At first glance we may not recognize the important role that bats play, both for the maintenance of ecosystems and for human benefits; but some data strongly demonstrate this to us. For example, at least 443 products used by man are obtained from 163 plant species that depend on bats for pollination or dispersal (Mickleburgh et al., 1992). In Mexico and the United States, the free-tailed bat (Tadarida brasiliensis) feeds on moths that are pests of corn and cotton crops, causing millionaire losses to agriculture (Gándara et al., 2006). Researchers are also studying echolocation (guidance based on ultrasonic sounds) produced by bats to make implants for deaf people (Planeta Tierra, 2011), in addition to the medical potential that Desmodus rotundus saliva may have.

For this reason, every April 17th, Bat Appreciation Day is celebrated, to recognize the important ecological functions of these wonderful animals and raise awareness in the population for their conservation.