Abies guatemalensis Rehder is a species of pine (family Pinaceae) that commonly receives the name of Pinabete, Romerillo, or Pinabete of Guatemala; In Mayan languages, ​​it is known as Pashaque, Tz’in chaj, Pajchac, and Paqtxaq (INAB & MARN, 2017; INAB, 2019).

Its natural distribution includes México (Jalisco), Guatemala, El Salvador and part of Honduras (Lempira). In Guatemala it is possible to find it in humid forests of altitude in the departments of Totonicapán, Huehuetenango, Quiché, Quetzaltenango, San Marcos, Jalapa, Chimaltenango, Chiquimula and Zacapa (INAB & MARN, 2017; INAB, 2019).

It is a fairly tall tree that can grow up to 50 m in height and its stem measures up to 4 m in diameter at chest height. The crown is pyramidal, in young trees regularly and more flattened in adults with a whorled arrangement (segments of several branches at the same height on the trunk). The bark in young trees is gray and smooth; in adults brown, furrowed, and split into shallow plates. In old trees, resinous buds 5 mm long can be observed. They are acicular in shape, 15 to 55 mm long and 1 to 2 mm wide, they are lustrous green on the upper surface and white to greyish on the underside. They are rigid and are inserted in two comb-shaped rows, on the twigs. The cones or “fruits”, botanically called strobili, are unisexual. The female ones are 85 to 130 mm long and 45 to 50 mm wide, red to purple in color, and cylindrical in shape. The males are 15 to 22 mm long and 27 to 30 mm wide, blue in color, oval in shape, and have squamiform leaves. They are characterized by falling apart disintegrating when opened (INAB & MARN, 2017; INAB, 2019). 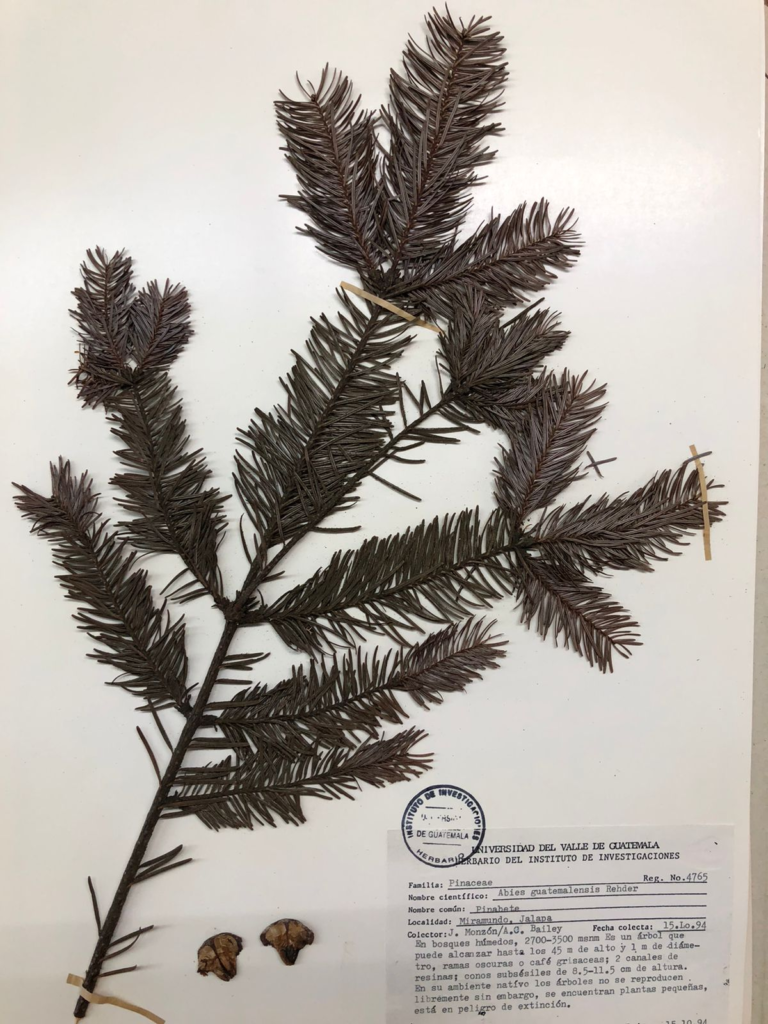 The problem in Guatemala

This species is used for ornamental purposes, its beauty and characteristic aroma are the main reasons why it is highly valued for the Christmas season. Its foliage is used as decoration, mainly for births, while the young trees are used as Christmas decoration trees. Due to its high demand, its commercialization and illegal logging put this species in danger of extinction, as of 1979 it was included in appendix I of the Convention on International Trade in Endangered Species of Wild Fauna and Flora -CITES-, at the be considered a species in danger of extinction and therefore its protection was ordered (CONAP,2019).

In 2008, CONAP carried out a diagnosis for the National Strategy for the Conservation of Pinabete, where it was estimated that Guatemala has an area of ​​27,548.29 hectares of Pinabete forest in 94 sites, 50% of the forest is within the Guatemalan System of Protected Areas –SIGAP-, its natural distribution is located from 2,400 to 3,500 meters above sea level (masl) in the aforementioned departments. One of the measures taken as part of the Strategy has been the establishment of controlled plantations of Pinabete so that people can continue to acquire their Christmas trees in a legal, conscious, and less damaging way for the forest; That is why it is very important not to buy small trees or decorations that do not come from these plantations (CONAP, 2019).

In 2019, this strategy was updated in order to reinforce the conservation of the species and the degraded areas to be recovered and restored, through monitoring and control of their illegal trade. Approximately 2,500 people from different institutions, NGOs, municipalities, and civil society were involved in these activities (CONAP, 2019). 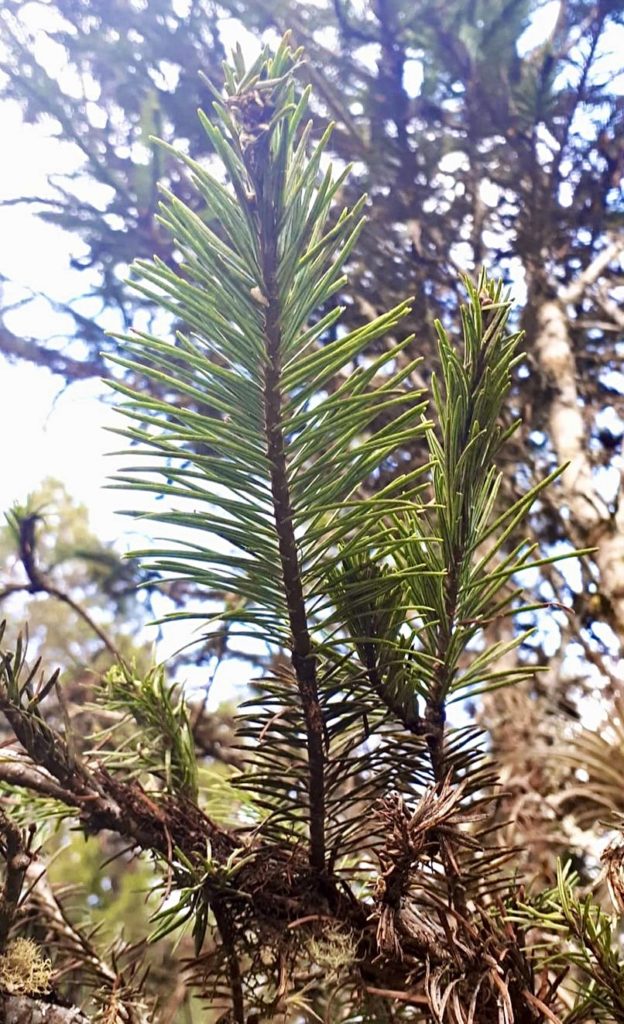 Degree in Biology graduated from the Universidad del Valle de Guatemala. In charge of the Tissue Culture Laboratory of the UVG Plant Protection laboratories from 2008 to 2012. Coordinator of the laboratories of the Department of Biology (UVG) from 2008 to 2014. Botanical consultant for environmental impact and taxonomy studies. Researcher in projects related to botany, ethnobotany, and Forest ecology. Curator and Researcher of the UVAL Herbarium of the Center for Environmental Studies and Biodiversity (CEAB) of the UVG since 2015. Professor in the Department of Biology, since 2008, Botany 1 and 2, Ethnobiology, Forest Ecology, Life Sciences, among others.

We have found different varieties of the species, could you explain the differences to us?

Where can we find the natural forests of Pinabete?

How does the marketing of Pinabete affect its conservation? Is it worth buying Christmas trees?

Do you know any interesting facts that we can learn about the Pinabete?

https://conap.gob.gt/conservacion-del-pinabete/
National Strategy for the Conservation of Pinabete