In a tall Cahue tree that was in Lampara River in El Golfete, Livingston, Izabal, during the September expedition we saw a gray lined hawk. It is the first time we have photographed it during the Livingston Biodiversity Project. It was calm and allowed itself to be photographed very well.

Buteo nitidus is an extremely active bird, usually seen chasing its prey in forest foliage. It feeds mainly on mammals, rodents, reptiles such as small lizards and snakes, and also on other species of birds, even macaws (Ara macao). It lives mainly on the edges of riverine forests, semi-open areas. It has a certain affinity for places near bodies of water. It is distributed from the United States to central Brazil. 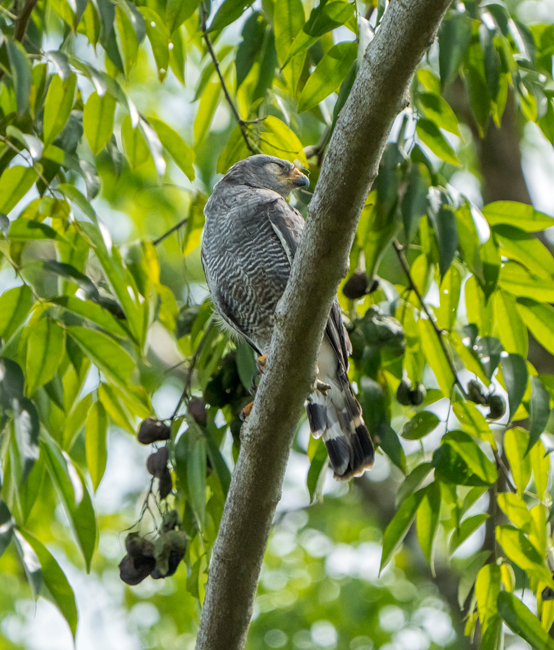 The gray-lined hawk is 46–61 cm in length and weighs 475 g on average. The adult has a pale gray body, the tail is black with three white bands and the legs are orange. It has fine white barring on the upper parts. Immature birds have dark brown upperparts, a pale-banded brown tail, brown-spotted white underparts, and a brown-streaked buff head and neck. This species is quite short-winged and has a fast agile flight for a Buteo.