June is a special month for the environment, on the 8th we celebrate The World Oceans Day and on the 16th World Sea Turtles Day. These days have been recognized to raise awareness of the impacts that human activities are generating on the ocean and the inhabitants who depend on it. Our oceans have been polluted with tons of plastic, garbage, chemicals, oils, and many other substances, affecting the entire functioning of these ecosystems and a large number of species, including sea turtles, which are currently in danger of extinction. But, how will we give importance to their care and conservation if we do not know them or know how incredible they are? Probably there are many things you want to learn about them.

Turtles are air-breathing reptiles who inhabit tropical and subtropical ocean waters throughout the world. Some species can dive up to 900 meters as they are able to withstand enormous pressure. They don’t have teeth and their shells are made of over 50 bones fused together. They swim to specific beaches (they return always to the same one) in different countries to nest their eggs and depending on the species, they may lay up to 250 eggs in one nest and take around 60 days to incubate. But It’s estimated that just 1 in 1,000 will survive to adulthood. What is interesting is that the temperature of the sand determines the gender of the turtle, there will born more males with cooler sand and more females with warmer sand. 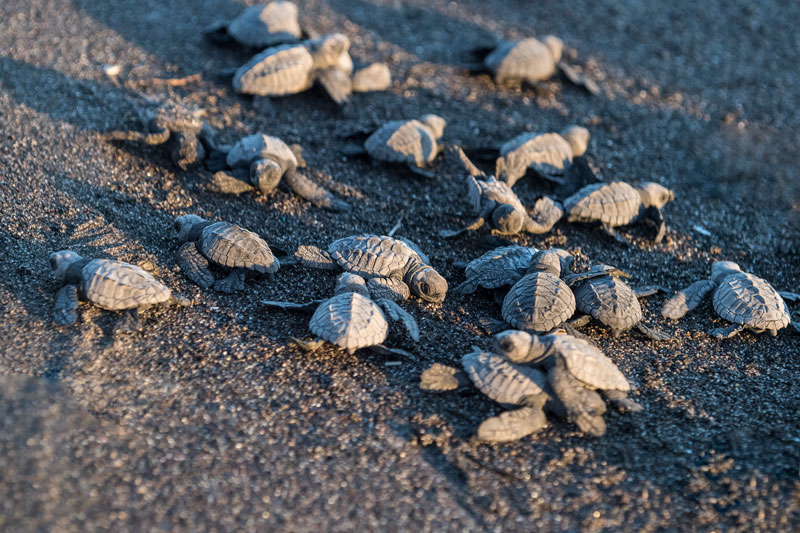 Something that you might not know is that sea turtles are as old as the dinosaurs, can you believe it? “Discovered fossils show turtles first started swimming 164 million years ago. Dinosaurs went extinct 65 million years ago and lived on Earth for 180 million years. They coexisted with prehistoric turtles for a long time. These turtle species belonged to a group of reptiles called Archelon, Greek for “ruler turtle” named after its enormous size. The largest Archelon fossil was found in South Dakota and measured more than 4 meters long and 16 meters wide” (Radley, 2016).

Which sea turtles could you find in the Guatemalan coasts?

1. Olive Ridley (Lepidochelys olivacea) Nesting: July-October.
The Olive Ridley turtles are known for nesting together in aggregations known as arribadas, groups of about 200,000 at once. They are also considered the most abundant sea turtle. Olive ridleys forage of crabs, jellyfish, clams, snails, and some algae.

2. Black turtle(Chelonia mydas agassizii) Nesting: May-August.
The black turtle is a subspecies of the green turtle, but is slightly smaller and is often called that way due to its somewhat darker appearance, range from gray to black. These turtles are the only ones that nest in the Galapagos Islands. They also nest on the Pacific coast of Central and South America, laying about 70 eggs.

3. Hawksbill (Eretmochelys imbricata) Nesting: May-November.
The hawksbill turtle is one of the smallest of all sea turtles, measuring up to 90 cm. in length and reaching up to 80 Kg. Commonly found in the Caribbean Sea, the northern Gulf of Mexico, Greater and Lesser Antilles, and through Central America to the south to Brazil. They eat mollusks, marine algae, crustaceans, sea urchins, fish, and jellyfish. Its main threat is the commercial exploitation of juveniles and adults for the beauty of its shell, which crafts and other products are made of.

4. Green turtle(Chelonia mydas) Nesting: February-March
Green turtles received their name due to their diet, based on seagrasses and rooted algae, which gives their fat a greenish color. They have small rounded heads and a smooth carapace.

5. Loggerhead (Caretta caretta) Nesting: May-October
The loggerhead is named that way for its large head. It has heavy strong jaws for crushing crabs, mollusks, and other marine invertebrates. The greatest threat is the loss of nesting habitat due to coastal development, predation of nests, and human disturbances like coastal lighting that cause disorientations for the turtles.

6. Leatherback (Dermochelys coriacea)
These turtles are called “leatherback” because unlike other sea turtles, they have a flexible rubbery carapace that allows them to dive deeper than 1250 meters and have a long esophagus lined with spines to facilitate the digestion of jellyfish. They are the largest sea turtles, males can reach up to 2.6 meters and 2000 pounds. The Arctic and the Atlantic are the only oceans where you won’t find them.

Now that we know the turtles that visit our coasts, why do you think their conservation is so important?

Scientists describe sea turtles as keystone species, which means they play roles to support ecosystem function and balance. They are very important for the food chain. For example, Leatherbacks keep jellyfish populations in check by feeding on them and at the same time favors the growth of fish populations, since fish eggs and larvae are the main food for jellyfish, so they collaborate in the control of species and also serve as food for other species that consume their eggs, hatchlings, and juveniles. The hawksbill turtle limits the growth of sea sponges and helps to maintain coral reef. The green turtle the only one considered mainly herbivorous helps to maintain and renew the prairies of underwater plants, so the turtles also help to maintain habitats and provide habitats for other species when they die, since they take advantage of their empty shells. 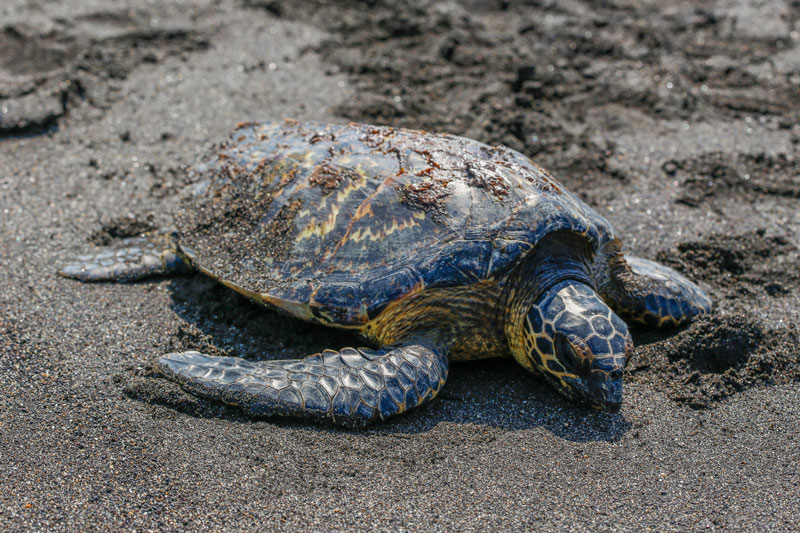 However, despite its long trajectory throughout history, actually, they are being threatened by different causes. One of them is illegal to traffic. In Guatemala, sea turtles are commercially harvested along the Atlantic and Pacific coasts. Local harvesters sell the turtles and their products in major population centers within the country because of their high prices. The harvesting and cultural practices change depending on the coast. On the Atlantic, the adult turtles are killed for meat, shell, and calipee (edible substance inside the lower shell of a turtle) and eggs are also collected, meanwhile on the Pacific is considered evil and a “sin” to kill an adult turtle, but eggs are collected indeed.

In addition to commercialization, as we have already mentioned, the pollution is also threatening the turtles. Plastic pollution is the main one. It is estimated that one sea turtle out of two has ingested plastic because they often mistake it for food such as jellyfish. Climate change is another problem, researchers suggest higher temperatures may cause a higher ratio of female sea turtles, potentially affecting genetic diversity in the future. Also, the entanglement in fishing gear and coastal habitat destruction affect the turtles. You can check the conservation status of each species in the red list of threatened species: https://www.iucnredlist.org/es/

Sea turtles over the millions of years have contributed to the formation, maintenance, and evolution of the environments in which we humans appeared, now it is our responsibility to take actions to keep them swimming in our seas.

FLAAR Mesoamerica has worked with Semillas del Océano to promote knowledge of sea turtle species in Guatemala. You can use the educational material that together we have created to learn more about them and the seas in our country by clicking: https://semillasdeloceano.org/material-educativo/

If you want to know more about the Mesoamerican plants and animals, you can visit our websites: